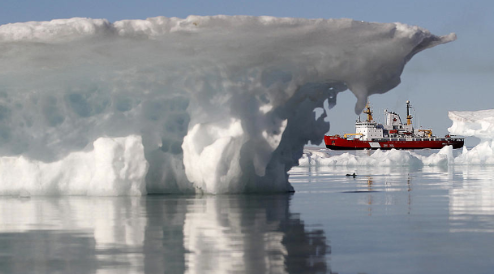 Climate is the new game changer

Lloyd’s of London estimates that Arctic oil and gas reserves could draw investment of up to US$100-billion within a decade. Now a paper published in the journal Nature reports that the release of methane from the Arctic could speed the melting of sea ice and climate change with a cost to the global economy of up to US$60-trillion 1.

Perhaps those pushing Arctic development should consult the peoples of the North, the millions threatened by famine and thirst, and the victims of recent floods in Europe, Canada and China and wildfires in Australia and the United States.

And yet while the global climate changes the world’s leaders seem more interested in dividing up the Arctic pie than working together to mitigate and manage the dramatic changes facing us. Will Canada’s leadership of the Arctic Council bring cooperation to protect the Arctic, or accelerate the 21st century resource-rush that threatens the world?

As Sweden’s Carl Bildt passed the chair of the eight-nation circumpolar Arctic Council, he raised serious concerns about the threats facing the Arctic environment. When Canada’s Minister of the Environment Leona Aglukkaq assumed the role of chairperson, she announced that the council would establish a Circumpolar Business Forum.

With powerful business interests pressing for development, it’s important to ask – to whom does the Arctic belong? The people of the North, and the wildlife who have shared their homelands for millennia? How about the island and coastal nations threatened to be submerged? What about our children and grandchildren who have no say in our decisions but must live with the consequences?

Sovereignty over much of the Arctic also continues to be contested. For many the Arctic should be part of the global commons, and yet those seeking to exploit the region are given preferential treatment.

The Circumpolar Business Forum and their political allies cannot be allowed to make this decision alone. For a legitimate determination of whether and how responsible development can take place, the needs and interests of the whole world must be addressed.

In recent decades, the average Arctic temperature, recorded at the National Snow and Ice data centre, has increased twice as fast as the global average 2. Six working groups commissioned by the UN are tracking these changes and encouraging member countries to become informed on key issues including Emergency Prevention, Preparedness, and Response, Arctic Contaminants, and the Conservation of Arctic Flora and Fauna 3. Although the Council receives valuable research and advice from these working groups, leaving out public advocates and First Nations compromises credibility and results.

The Kiruna Declaration, recently adopted by the Arctic Council, is not encouraging on this point. Within the Declaration, two very disparate values were revealed. The council “[recognizes] the central role of business in the development of the Arctic” while acknowledging “with concern that Arctic biodiversity is being degraded and that climate change is the most serious threat” 4.

How then can the Council assume that the risks are acceptable, especially before adequate public consultation and solid scientific data? The purpose of these groups is to collect and assess comprehensive baseline data for conservation and development decisions not to give cover to hasty approvals 5.

This returns us to the central question: is Arctic development in the best interest of today’s global inhabitants and future generations? Or does development primarily serve the interests of the rich and powerful?

Recently, the Arctic council welcomed India, China, Italy, Japan, the Republic of Korea and Singapore as observer states, further evidence that the resource race is expanding. Can we expect leaders, pressed by national and corporate interests, to protect worldwide interests in the management of the Arctic?

The pursuit of mineral wealth may have obscured other vital issues in the Arctic but now civil society advocates are demanding environmental justice and serious mitigation efforts against climate change.

The question to each of us is: do we care? If you do, get involved. Let Minister Aglukkaq know that you support a process that is inclusive and ensures that before any development proceeds there is no doubt it will be done safely and responsibly in the best interests of the world. If development proceeds, it has to be in accordance with vigorous international standards and monitoring, because it is too dangerous and irresponsible to make up the rules as we go.