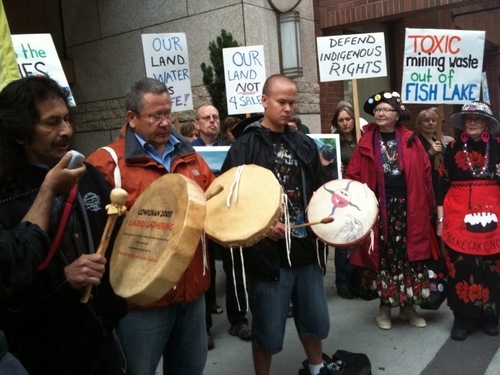 August 23rd marked the end of the second round of public hearings over a proposed mine development for the Chilcotin region. The Prosperity Mine project, first proposed by mining giant Taseko Limited in 2007, is located 125 km southwest of Williams Lake, in the interior of British Columbia.

Taseko has proposed to mine gold and copper from a deposit straddling Fish Lake, traditionally known as Teztan Biny by local First Nations. The project would include a 125km power line, a 2km access road, an open pit mine, and a large tailings facility.

Local First Nations, particularly the Tsilhqot’in, have had major objections to the project since it was first proposed, saying that it would not only infringe on rights and title by impacting traditional ceremonial, burial, hunting and fishing grounds, but also threaten the ecosystems that they have depended upon and cared for generations.

After undergoing a federal environmental assessment in 2010 by the Canadian Environmental Assessment Agency (CEAA), the federal panel concluded that the Prosperity Mine project would result in “significant adverse environmental effects on fish and their habitat, navigation, the current use of lands and resources for traditional purposes by First Nations and on cultural heritage”.

The company responded to the panel’s highly critical report by submitting a second proposal, in 2012. The proposal for this ‘New’ Prosperity Mine, presented Mine Development Plan #2, which attempts to ‘preserve’ Fish Lake. This plan was previously dismissed due to its greater long-term environmental risks and for not being economically feasible.

A major environmental concern continues to be the impacts of sub-surface leachate on groundwater quality. Because Fish Lake is located downstream of the proposed tailings area, contaminated leachate will likely make its way into the hydrological system of the lake. Similarly, wetland and grizzly bear habitat will be severely compromised throughout the development area.

The company claims it has listened to the concerns of local First Nations and the broader Canadian public, and has altered their development plan to address issues raised. In this new plan, the company has promised to construct its own tailings pond, have a shorter operating life for the mine (from 33 to 20 years) and implement watershed reclamation. The provincial government has weighed in citing the benefits such a project would bring for the local economy, which, having always been heavily forestry-based, has been all but decimated from the mountain pine beetle. But the Tsilhqot’in Nation, along with experts from Resource Canada as well as environmental professionals across the country, are more than skeptical of the companies promise to protect the lake from detrimental contamination, and question whether the project is feasible at all.

On Halloween 2013, the report from the federal environmental assessment panel was released. Unsurprisingly, concerns and criticisms which had been raised from environmentalists and First Nations are echoed throughout the report, which concluded that Taseko had an unrealistic contingency plan for water treatment, that the mine would infringe on the rights and title of the Tsilhqot’in, and threaten grizzly bear and fish habitat. An approval of the project at this stage would represent not only a complete disregard the federal environmental assessment panel’s findings and the expert advice of those who presented to the CEAA but more importantly the values, opinions and rights of local First Nations.

Another key question often overlooked in the mining review process is how much do Canadians and British Columbians care for our environment and the communities that depend on it? BC prides itself in being the province with the highest percent of protected land. Pride is one thing, but actions speak louder than words. We need to ensure that protected land is actually safeguarded from resource extraction, and continues to support flora, fauna, and traditional use.

Some of these precious areas have been and should be set aside for higher values than what we can get out of the ground. There is no second chance for the environment or the first peoples on the land. There will always be corporations and economists telling us that the destruction of the natural environment is necessary for economic development, that the degradation of our pristine landscapes and the sacred spaces of First Nations communities is a worthy tradeoff for the money derived from resource extraction. At what point do we, as British Columbians, tell them: “find an alternative, you already have access to more than 85% of the province and your stewardship of those lands does not engender confidence”.